Residues of Mabea fistulifera Mart. were used in this study as a bioadsorbent for the removal of the Reactive Blue 21 (RB 21) and Direct Red 80 (DR 80) dyes from aqueous solutions and samples of real effluents enriched with these dyes. The influence of pH, kinetic, and adsorptive parameters for the removal these dyes were investigated by conducting a series of batch experiments. The maximum adsorption using this bioadsorbent was observed at pH = 2.0 for both dyes. The time of adsorption equilibrium was established at 300 minutes for DR 80 and 120 minutes for RB 21. The Langmuir model stood out because it described the behavior of the sorptive system with higher fidelity than the Freundlich model showing the coefficient of determination (R2) above 0.98. It was possible to obtain the maximum adsorption capacity of the bioadsorbent, for the Direct Red 80 and Reactive Blue 21 dyes, using the Langmuir Isotherm; these values were determined as 4.92 mg g-1 and 11.13 mg g-1, respectively. The pseudo-second order kinetic model best described the adsorption process of the RB 21 dye by the bioadsorbent, however, the intra-particle diffusion is also involved in the mechanism of adsorption. The Morris and Weber diffusion model suggested that the intra-particle diffusion is prevalent throughout the process of adsorption for the DR 80 dye. The bioadsorbent was employed on real textile effluent samples enriched with aqueous solutions of these dyes after the adsorptive conditions were optimized; 85 % RB 21 and 94 % DR 80 removal rates were obtained from the effluent’s matrix. 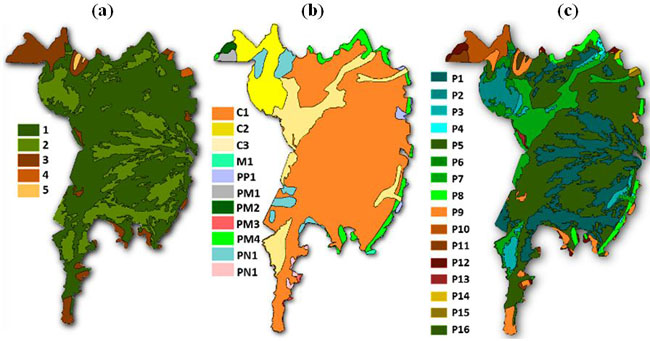