This study used satellite images and GIS techniques to analyze the effect of the decrease in water level in Furnas Lake during 2012. The analysis was based on satellite images captured during three different periods: prior to the event (images of 2010), during the year of the event (images of 2012) and after the event (images of the year 2013). LISS3/Resourcesat-1 images were used for the years 2010 and 2012 and OLI/Landsat-8 images for the year 2013. The images were processed and interpreted into a GIS environment. The final product had four classes: i) permanent water surface during the three periods, ii) permanent dry surface during the three periods, iii) recovered water surfaces and iv) not recovered until the last period (2013). The methodology consisted of five stages: preparation, density slice, map algebra, raster editing and area calculation. The map of the water level drop in the Furnas Lake was generated by an algebraic matrix operation between the surface water mask drawn based on the near-infrared bands. The result of this operation was manually edited in order to correct classification errors. For data validating, we compared photographs published by local media during the event with the generated maps. The results showed that this methodology is straightforward and easily reproduced and can be used to assess other regions. 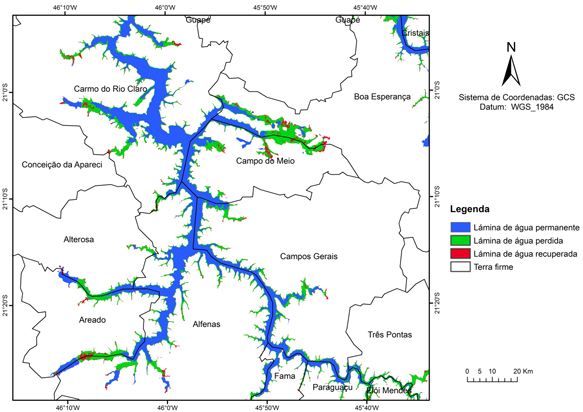