The objective of this paper is to provide near real time information about deforestation detection (DETER) in the entire Brazilian Amazon using MODIS high temporal resolution images. It is part of the operational deforestation monitoring project to estimate the annual deforestation rate in the Brazilian Amazon (PRODES). A rapid deforestation detection method was designed to support land use policies in this region. In order to evaluate the proposed method a test site was selected covering a Landsat ETM+ scene (227/68) located in Mato Grosso State. For this purpose a multitemporal series of MODIS surface reflectance images (MOD09) and the corresponding ETM+ images from June to October 2002 were analyzed. It was found that small deforested areas (lower than 15 ha) were detected by MODIS images with lower accuracy when compared with ETM+ images. As the deforested areas increase MODIS and ETM+ results tend to converge. This procedure showed to be adequate to operationally detect and monitor deforested areas and has been used since 2004 as part of a government plan to control the Amazon deforestation. 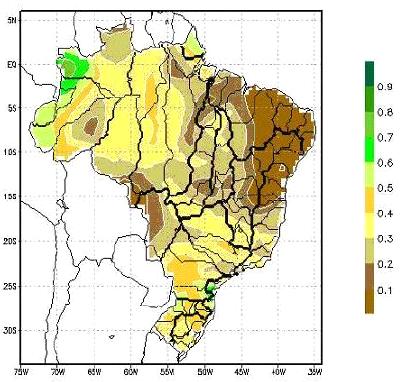