Surface runoff in the Itaim Watershed

This paper describes a work done in the Itaim watershed at Taubaté, SP, and had the objective of estimating the surface runoff based on the Curve-Number (CN) method in area with vegetation cover of grassland (Brachiaria Decumbens), that prevails in this watershed. The surface runoff was estimated using three different methods: 1st) values of accumulated Infiltration (IAc) obtained in the field were used, considered as the Potential Infiltration (S), which varied from 15.37 mm to 51.88 mm with an average value of 23.46 mm. With those measured infiltration rates and using the maximum precipitation values for Taubaté, SP, with duration time of 3 hours: P = 54.4; 70.3; 80.8; 86.7; 90.9; 94.1 and 103.9 mm, respectively, for the return times, Tr = 2, 5, 10, 15, 25, 50 and 100 years, the following values of surface runoff were generated: 34.83; 49.33; 59.14; 64.71; 68.69; 71.73 and 81.10 mm, respectively; In the 2nd method it was considered that the prevailing vegetation cover of the watershed was Dirty Pasture (Pasture with regrowth of natural vegetation) and therefore, a value of CN = 75 was used and generated a potential infiltration, S = 84,7 mm and resulted in surface runoff values that varied from 11 to 44 mm; In the 3rd method, the value of CN was considered equal to 66.57. This value was calculated weighting the contribution of all land use cover classes of the watershed, and as a result a higher value of potential infiltration, S = 127 mm, was obtained. Consequently, the surface runoff values were 5.33; 11.64; 16.72; 19.83; 22.16; 23.98 and 29.83 mm, respectively. Therefore, the comparison with the results obtained by the two Curve-Number methods (conventional and weighted) allowed to be concluded that the Curve-Number method applied in a conventional way underestimated the surface runoff in the studied area. However, results indicate that it is possible to use this method for surface runoff estimates as long as adjustments based on potential Infiltration obtained in field be are available for local situations. 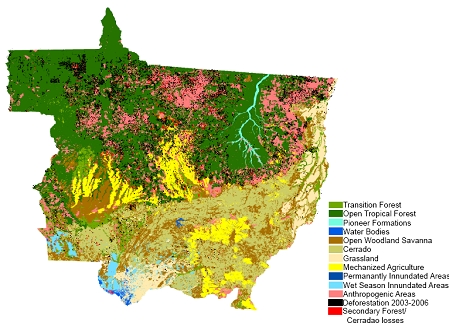