The historical influence of tributaries on the water and sediment of Jacuí’s Delta, Southern Brazil

The high population density in a metropolis leads to socio-environmental impacts that directly affect local water resources. This work evaluated the historical data (between 2000 and 2014) of water and sediment monitoring in the Jacuí’s Delta region and analyzed the relationship between these sites. Seven monitoring sites around the Jacuí's Delta were evaluated: the outflow of the rivers Jacuí, Caí, Sinos, and Gravataí; the channels Ilha da Pintada and Navegantes; and Lake Guaíba. Water data were evaluated for: air and water temperature; depth; pH; electrical conductivity; transparency; turbidity; dissolved oxygen; biochemical oxygen demand; phosphorus; nitrogen; total residues; and escherichia coli. Sediment were evaluated for pseudo-total concentrations of metals (Al, Fe, Ca, Mn, Ba, V, Zn, Cu, Pb, Cr, Ni, Co, Li, Be, Cd, Hg, As, and Ag). The quality of water and sediment in the Jacuí's Delta are linked with the tributaries and priority flows of the channels. The historical data of water and sediment around the Jacuí's Delta shows the influence of the tributaries with low quality in the downstream points. The pollution of the rivers Caí, Sinos, and Gravataí negatively affects the environmental quality of the channel Navegantes and Lake Guaíba (catchment points to water supply). The water in those sites presents reductions in dissolved oxygen and high values of coliforms, and the sediment shows high concentrations of metal Zn, Pb, Cr, and Hg. Despite the reduction in Pb and Hg values in the sediment over the past years, pollution from the tributary rivers still persists. 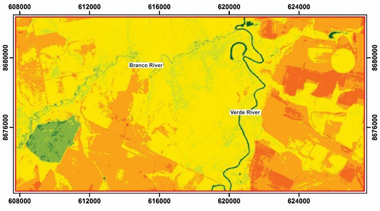